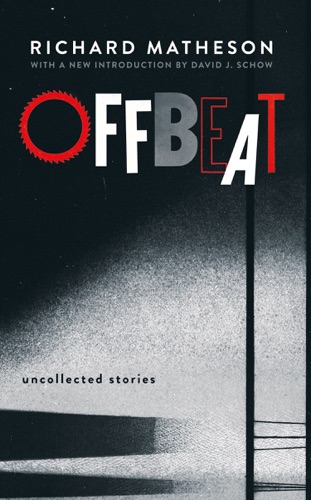 In the aptly titled Offbeat, Richard Matheson, a modern master of strange fiction, offers thirteen excursions into the unsettling and bizarre. In these stories you will encounter a major league pitcher with a horrific secret for his astonishing success; an ordinary man who wakes to find himself in a silent, empty world; a death row prisoner with an extraordinary explanation for his innocence; and a novelist whose fictional creations transcend the printed page.

Originally published as a limited edition hardcover, now long out of print, the remarkable and rare tales offered in Offbeat display the brilliant imagination that gave birth to such classics as I Am Legend and Hell House. This edition also features an afterword by the author and a new introduction by David J. Schow.

“Perhaps no author living is as responsible for chilling a generation with tantalizing nightmare visions.” - The New York Times

“The author who influenced me the most as a writer was Richard Matheson.” - Stephen King

“Matheson is one of the great names in American terror fiction.” - The Philadelphia Inquirer

Atlante delle isole remote. Nuova edizione aggiornata by Judith Schalansky - The Great Railway Bazaar by Paul Theroux - Why the Dutch are Different by Ben Coates - That I May Die Roaming Third Edition by Oisin Hughes - The Olive Harvest by Carol Drinkwater - Tickling the English by Dara O Briain - A Walk In The Woods by Bill Bryson - Down Under by Bill Bryson - The Road to Little Dribbling by Bill Bryson - Notes From a Small Island by Bill Bryson -