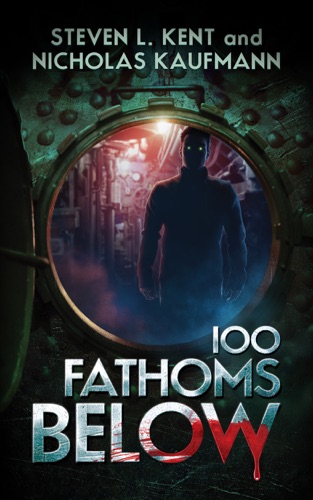 100 fathoms below …
The depth at which sunlight no longer penetrates the ocean.
1983. The US nuclear submarine USS Roanoke embarks on a classified spy mission into Soviet waters. Their goal: to find evidence of a new, faster, and deadlier Soviet submarine that could tip the balance of the Cold War. But the Roanoke crew isn’t alone. Something is on board with them. Something cunning and malevolent.
Trapped in enemy territory and hunted by Soviet submarines, tensions escalate and crew members turn on each other. When the lights go out and horror fills the corridors, it will take everything the crew has to survive the menace coming from outside and inside the submarine.
In the dark.
Combining Tom Clancy’s eye for international intrigue with Stephen King’s sense of the macabre, 100 Fathoms Below takes readers into depths from which there is no escape.
“100 Fathoms Below is deliciously creepy and deeply unnerving. Kent and Kaufmann take a real bite out of the horror genre with this killer of a book!”—Jonathan Maberry, New York Times bestselling author
“[A] chilling, tension-driven thriller…Readers will not be able to turn away.”—Publishers Weekly
“Full of claustrophobic horror…and hardcore evil, 100 Fathoms Below creates a powerful sense of place and a tension that festers in your gut throughout.”—Christopher Golden, New York Times bestselling author of Ararat
“Between potential attacks from enemy boats and the paranormal danger lurking among the crew, readers will wonder which will destroy the USS Roanoke first.”—Booklist

Dopamine Nation by Anna Lembke - A Brief History of Time by Stephen Hawking - Country by Bruce Pascoe, Bill Gammage & Margo Neale - Pets on the Couch by Nicholas Dodman - Are We Smart Enough to Know How Smart Animals Are? by Frans de Waal - After by Dr. Bruce Greyson, MD - Our Final Warning by Mark Lynas - The Flying Saucers Are Real by Donald Keyhoe - Constellations by Govert Schilling & Wil Tirion - Electrify by Saul Griffith -