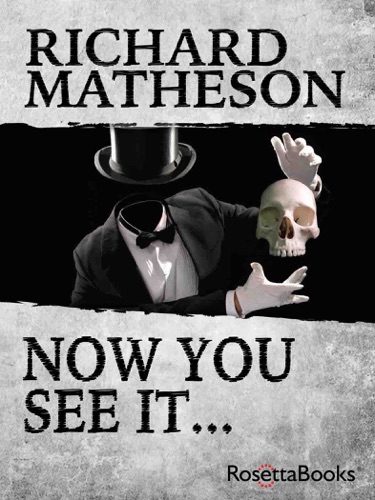 The author of I Am Legend transforms a lonely mansion into a madhouse where a group must face grisly tricks, shocking twists, and the mind of a killer.

In Now You See It, the prolific master of suspense and horror delivers a knock-out tale the likes of which have not been seen since Henry Clouzot’s devilish thriller Diabolique.

Some years ago, the Great Delacorte, a famed stage magician, came down with a stroke that left him in a vegetative state, able to move only his eyes. The entire action of the novel is witnessed through these eyes as Delacorte sits in the Magic Room of his country estate, a room custom-tailored to display stage illusions. Delacorte’s son, Max, has taken his name and place as an illusionist in every effort to replace his father. Max is supported by his wife Cassandra and her amazingly identical lookalike younger brother Brian. But for the past year, Cassandra has been poisoning Max’s food with arsenic and a sleeping pill. She wants the act all for herself—but Max has his own ideas, and his revenge is the big dish that Matheson sets before us in this dazzler that offers top-flight fun!

Praise for Now You See It

“One of his strongest efforts…. We’re all a lot richer to have Richard Matheson among us.”―Dean Koontz

“There are as many twists and turns as a medieval catacomb in one of the most fun novels of the year.”―Rocky Mountain News
“Matheson’s prose is extremely smooth and the pacing frantic.”―The Philadelphia Inquirer