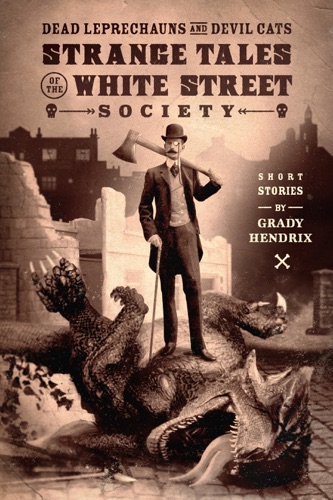 <i>New York Times</i>-bestselling author, Grady Hendrix (<i>Horrorstör</i>, <i>Paperbacks from Hell</i>), savagely satirizes Victorian adventure fiction in this steampunk smackdown full of decapitated heads that sing, Tong wars, bacon sex, German holiday demons, and the Potato Homunculus! Some of the most popular stories ever released on audio fiction platform Pseudopod, the White Street Society tells the tales of a band of 19th Century gentleman adventurers who investigate the supernatural, often with violence, sometimes with science.<br>
<br>
Sending up 19th century fears about women, Germans, the Irish, Chinatown, Southerners, politicians, and anyone who wasn’t the “right” kind of person (read: male and white) this collection of cases contains shocking details that are sure to tighten the corsets and spin the mustaches of all gentle readers. Animals and pregnant women are advised to KEEP AWAY from “The Hairy Ghost!”, “The Corpse Army of Khartoum!”, “The Yellow Peril!”, and “The Christmas Spirits!” as well as the shocking new story premiering in this collection, “The President Who Would Not Die!” For those bold readers who desire a strong blast of nonsense, allow us to introduce you to the supernatural wonders that these bold men of the 19th century were compelled to shoot, poison, burn, and beat to death with shovels, all in the name of PROGRESS!