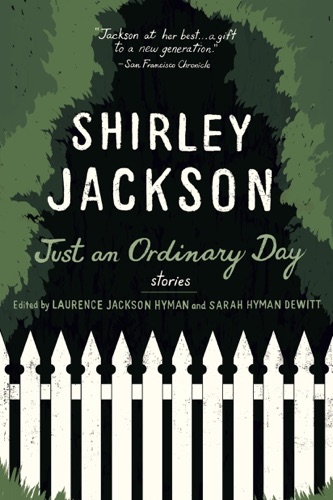 “Jackson at her best: plumbing the extraordinary from the depths of mid-twentieth-century common. [Just an Ordinary Day] is a gift to a new generation.”—San Francisco Chronicle

Acclaimed in her own time for her short story “The Lottery” and her novel The Haunting of Hill House—classics ranking with the work of Edgar Allan Poe—Shirley Jackson blazed a path for contemporary writers with her explorations of evil, madness, and cruelty. Soon after her untimely death in 1965, Jackson’s children discovered a treasure trove of previously unpublished and uncollected stories, many of which are brought together in this remarkable collection. Here are tales of torment, psychological aberration, and the macabre, as well as those that display her lighter touch with humorous scenes of domestic life. Reflecting the range and complexity of Jackson’s talent, Just an Ordinary Day reaffirms her enduring influence and celebrates her singular voice, rich with magic and resonance.

“Shirley Jackson’s stories are among the most terrifying ever written.”—Donna Tartt

“An amazing writer . . . If you haven’t read [Jackson] you have missed out on something marvelous.”—Neil Gaiman

“Shirley Jackson is unparalleled as a leader in the field of beautifully written, quiet, cumulative shudders.”—Dorothy Parker

“An author who not only writes beautifully but who knows what there is, in this world, to be scared of.”—Francine Prose

“The world of Shirley Jackson is eerie and unforgettable.”—A. M. Homes

“Jackson enjoyed notoriety and commercial success within her lifetime, and yet it still hardly seems like enough for a writer so singular. When I meet readers and other writers of my generation, I find that mentioning her is like uttering a holy name.”—Victor LaValle

Entangled Life by Merlin Sheldrake - A Brief History of Time by Stephen Hawking - Rutherford and Fry’s Complete Guide to Absolutely Everything (Abridged) by Adam Rutherford & Hannah Fry - The Physics Book by DK - A Short History of Nearly Everything by Bill Bryson - Living Planet by David Attenborough - Anatomy in Action by Theodore Dimon, Jr. & G. David Brown - Leviathan by Philip Hoare - Seven and a Half Lessons About the Brain by Lisa Feldman Barrett - Darwin's Doubt by Stephen C. Meyer -