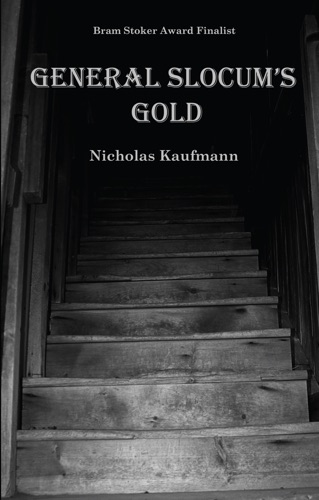 The groundbreaking, Bram Stoker Award-nominated novelette by the acclaimed author of Chasing the Dragon and Dying Is My Business.

Sackett is no ordinary thief. He was born with strange abilities, powers he uses to pull off dangerous and unusual heists. Fresh out of Rikers and eager to get back in the game, he's got his eye on a fortune in gold rumored to be buried on a deserted island in New York's East River. It should be the easiest job he’s ever pulled. But North Brother Island isn't as deserted as he thought. Something is waiting beneath the waves. Waiting for Sackett. Waiting to protect their treasure.

Includes the bonus short story "The Jew of Prague."

"Sensational….Nicholas Kaufmann is a brilliant story teller who is able to keep the reader on the edge of their seats while taking them through an exciting rollercoaster of a ride." — Lipstik Indie

"Kaufmann tells this tale with authority….Fans of fiction that blends crime and the supernatural (found in the works of such writers as Ed Gorman or Tom Piccirilli or venues such as Tales from the Crypt or ShockSuspense Stories) will find Sackett's story to be a delightful foray in that vein….[A] fun horror yarn. This reader certainly looks forward to more of Kaufmann's fiction." — Horror Reader

"Kaufmann has a sure hand for plotting and dialogue, and his precise prose keeps the caper moving briskly to its horrific conclusion…The author has tapped into a deep vein of pulp storytelling for his tale." – Dead Reckonings

"Kaufmann draws you into his spell without gore, without the big scares that other authors rely upon, but with a steady growing dread that marks truly great horror. I strongly recommend General Slocum's Gold…[He] pulls this off remarkably well." – Belleville News-Democrat

Brain Hacks by Keith Barry - Simple Steps to Foot Pain Relief by Katy Bowman - This Is Your Destiny by Aliza Kelly - Deep Fitness by Philip Shepherd & Andrei Yakovenko - The Little Book of Happiness by Patrick Whiteside - The Nine Degrees of Autism by Philip Wylie, Wenn Lawson & Luke Beardon - Commit! by Enda McNulty - Wintering by Katherine May - The Book of Overthinking by Gwendoline Smith - Atomic Habits by James Clear -